The latest Banksy coronavirus graffiti has been removed from the London underground. The TFL cited their 'strict anti-graffiti policy' as the reason.

Banksy has done it again, with what has become known as the ‘Banksy Coronavirus Graffiti Scandal’. The infamous and anonymous graffiti artist released a new video on Instagram on Tuesday, 14th July 2020. This new Banksy London graffiti art depicts a rat sneezing in the subway, and others parachuting in using face masks. The video with the caption ‘if you don’t mask – you don’t get‘ shows someone we can presume is Banksy himself, dressed as a cleaner entering the subway. However, instead of deep cleaning a train carriage, the figure proceeds to spraypaint the images of rats with hand sanitiser and face masks across the walls. One unmasked rat is caught mid-sneeze and spraying a gunky coloured trail of droplets across the window.

The artist is seen hopping on board the Tube to tag the train with rats depicted using masks as parachutes and dispensing hand sanitiser.

Afterwards, the stencilled rats are quickly followed by a shot of Banksy spraying his signature tag across the carriage wall. A collaborator is filming Banksy performing these acts of graffiti. A bemused onlooker is watching, who Banksy quickly ushers away.

The video ends with a clever premeditated statement painted on both the wall of the station and carried through to the inside of the train. When the door of the carriage opens the statement on the wall reads ‘I get lockdown,’ followed by ‘but I get up again’ as the tube door closes. The music to British alternative band Chumbawumba’s 1997 hit track ‘Tubthumping’ is playing in the background.

This controversial new Banksy coronavirus graffiti attack serves as a reminder for people to wear masks. Wearing masks has become a bit of a political hot potato in the UK, where the government recently announced it was compulsory to wear masks on public transport. However, Banksy is not known to shy away from controversy, and is a known supporter of masks. 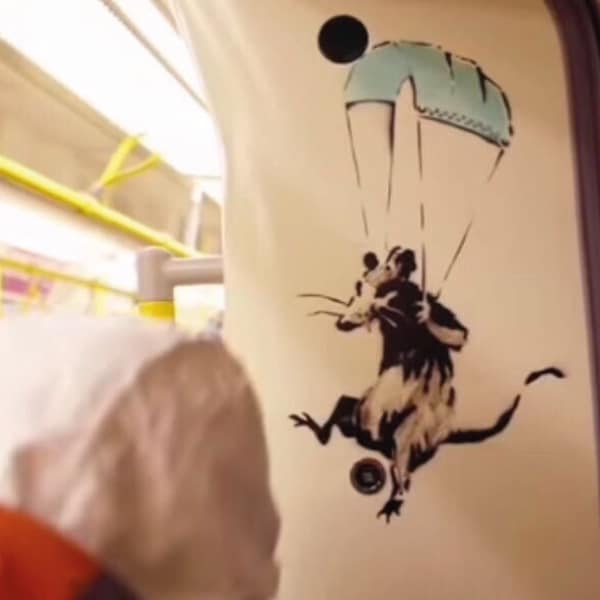 As soon as this latest Banksy coronavirus graffiti piece was spotted it was removed. The Transport for London (TfL), cited their ‘strict anti-graffiti policy’ as the reason for taking it down. They followed with a statement stating “We appreciate the sentiment of encouraging people to wear face coverings, which the vast majority of customers on our transport network are doing.”

However, the TfL did not consider Banksy’s message all bad. They went on to say “We’d like to offer Banksy the chance to do a new version of his message for our customers in a suitable location.”

The quick removal of the graffiti reflects the strict anti-graffiti policy of the Transport for London committee. It was not a mistake as some people claim. Besides, in these times of the coronavirus, the quick response can also be interpreted as a reassuring commitment to keeping the underground clean and sanitised. This is not the first time Banksy has used rats in his work. For instance, back in April, he posted pictures of rats that he had stencilled on his bathroom walls. And even on his toilet. The work is said to be an act of solidarity for all those who have had to adapt to a life working from home during the lockdown. The images, posted on Instagram, had the added caption “My wife hates it when I work from home.”

While not really a piece of graffiti, Banksy also donated a piece of art to a hospital. This new piece is touchingly named ‘Game Changer’. The artwork shows a little boy playing with a doll dressed like a nurse wearing a cape, and is a representation of the new ‘superheroes’. The dolls of Batman and Spiderman sit discarded in the bin.

The BBC reported that the artist included a note for the hospital that read, “Thanks for all you’re doing. I hope this brightens the place up a bit, even if its only black and white.”

Firstly, Banksy is an anonymous street artist, vandal and public activist. He has been active since the 1990s. His works include political or social commentary and can be found on buildings, walls and bridges throughout the world. Some of his artworks sell for hundreds of thousands of dollars.

Yet to councils throughout the world he has become a recurring nightmare. In October 2008 the Westminster council in London stated that it would remove any graffiti, ‘regardless of the reputation of its creator’. They specifically stated that Banksy ‘has no more right to paint graffiti than a child’.

As the discussion continues about what is a piece of art and what is graffiti, the fact remains that graffiti removal costs councils around the world millions. Even if it is a work by Banksy.

So, what are your thoughts?

Vogt, A 2020, ‘Banksy’s latest artwork on the coronavirus has been removed from the London Underground’, CNN, 15 July 2020, viewed 20 July 2020, <https://edition.cnn.com/style/article/
banksy-london-underground-trnd/index.html>