Graffiti grime would be combated by Melbourne City Council

There are fears of visitors being driven away due to grimey, unsafe-looking lanes. During the last few weeks, graffiti vandals have tagged several buildings in Melbourne CBD. More than a thousand graffiti tags have been removed since the beginning of the year.

Local residents’ associations have revealed to the authorities that graffiti removal was not quick enough, with defaced buildings with many tags remained visible even for months. The broken window effect started to expand in the inner district, affecting businesses and families.

“In the massive public places, it seems to take a long time to get anything done about it,” said Jenny Eltham from the EastEnders Association.

“It makes the city look ­unsafe and unoccupied.”

On the one hand, the vibrant street art culture is one of the biggest attractions of the CBD, but there is a difference between art and whats has been found lately in famous laneways. Vandalism has defaced emblematic street art pieces all around the city.

Royal Melbourne Hospital is covered in graffiti. It is unusual behaviour from taggers, as they usually stay within lanes and abandoned buildings. Some authorities have associated this new behaviour with the unoccupied streets during COVID-19 lockdowns. Local residents mentioned finding the attack on the hospital disrespectful.

In response to the continuous graffiti attacks, Melbourne City Council has stepped up to fight graffiti grime. Since January, the council has spent over a million dollars removing graffiti tags trying to combat the vandalism mayhem.

According to Lord mayor Sally Capp, the cleaning initiatives were ordered after the significant increase in graffiti attacks during restrictions.

In a quick round performed by Ablate, we were able to spot 22 businesses or for-lease properties tagged on Elizabeth Street, Queens and Swanston. Nearly 22 per cent of all shops fronts on Swanston Street from Melbourne Town Hall to the Victoria State Library.

Graffiti covering around 50,000 sq m is removed each year, according to the city council. That work represents a $15m cleaning expenses for the city.

“We’re investing more than ever to fight grime and keep our streets clean and free of tags,” Cr Capp said.

“Getting the basics right is a top priority for all of us at the City of Melbourne.”

As the response time of the authorities is not quick enough, local residents have been forces to solve the issue, painting over tags and hiring graffiti removal specialists. Not acting fast tends to invite vandals to continue attacking the area.

Residents say the graffiti is getting ‘worse and worse’. Picture: Tim Carrafa

Have you seen an area attacked by graffiti?

We can help you to get a professional preventive pressure washing service. Call us 24 Hours, 7 days a weeks!
REQUEST FREE QUOTE

Other residents said that graffiti in the city “is getting worse and worse”. Brian McNiholl said, “I’m a believer of getting rid of it quickly– if it stays there– then people feel they can get away with it”. And he is right. In this blog, we have covered different techniques to prevent graffiti, as it is very likely that attackers frequently get away with it once the tag is performed. “The council cleans one spot of graffiti, and you know, within about five feet, there’s another (but) it stays because that one wasn’t reported. Police said it investigates all instances of graffiti and vandalism. Picture: Tim Carrafa

Victoria Police stated that they investigate all instances of graffiti and vandalism. Graffiti is a frustrating crime for business owners and homeowners, but it can also result in horrific injuries when vandals reach dangerous areas such as the rail network or high locations.

“Police see graffiti as a gateway crime to much more serious offending, with young people becoming more embedded in a culture of crime leading to further anti-social behaviours.”

Melbourne City Council is encouraging visitors and city-goers to report acts of vandalism. Nevertheless, the council needs to work around a more straightforward and accessible way to report it. If you don’t know where and how to report graffiti vandalism, we recommend you to read our How and Where to Report Graffiti in Melbourne blog.

There’s never been a more critical time to keep our city clean. Councils need Melburnians to let them know areas that need attention and for everyone to do their bit and call out dodgy behaviour such as littering or tagging. 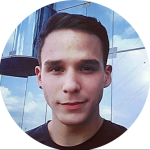 I’m a Technologist experienced with all stages of digital product development, from branding to user experience and digital marketing. I have 10 Years of Experience Attracting More Engaged Customers for my Clients.